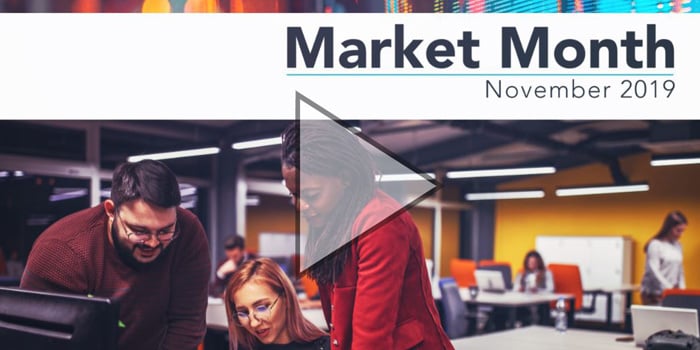 Stocks grew for the third straight month as each of the benchmark indexes listed here posted solid returns in November. Despite unrest in Washington as the impeachment process drones on, investors were encouraged by the possibility of favorable movement toward a resolution of the trade war between the United States and China. While inflation remained stymied, consumer spending remained solid and business fixed investment perked up.

By the close of trading on the last day of the month, each of the benchmark indexes listed here posted gains, led by the Nasdaq, which climbed close to 5.0%. The small caps of the Russell 2000 advanced nearly 4.0%. The large caps of the Dow and S&P 500 also posted solid monthly gains of well over 3.0%. Year-to-date, the Nasdaq is more than 30.0% ahead of its 2018 closing value. In fact, of the indexes listed here, only the Global Dow has not gained at least 20.0% for the year.

By the close of trading on November 29th, the price of crude oil (WTI) was $55.17 per barrel, up from the October 31st price of $54.09 per barrel. However, as OPEC meets at the end of November, it is expected that major oil-producing nations will extend production cuts, which may impact prices moving forward. The national average retail regular gasoline price was $2.579 per gallon on November 25th, down from the October 28th selling price of $2.596 but $0.040 more than a year ago. The price of gold fell by the end of November, dropping to $1,465.60 by close of business on the 29th, down from its $1,515.10 price at the end of October.

December is typically a slow month for trading. Last December saw stocks plummet, but economic signs in the United States are fairly encouraging. The Federal Reserve reduced interest rates three times so far in 2019, but it is less likely to drop rates again this month. Employment is expected to remain strong, while inflation, fixed business investment, and manufacturing may continue to show weakness.