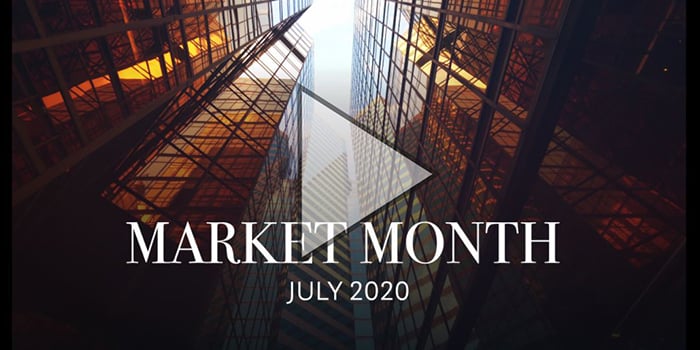 
On the positive side, 4.8 million new jobs were added in June, the housing sector surged, and industrial production continued to rebound. Investors also may be hoping that more financial stimulus is in the offing. Energy stocks, which had plunged in May, rebounded in June and continued to keep pace in July.


The COVID-19 pandemic continues to dominate nearly every aspect of life. Some states are seeing the number of reported cases soar and have considered (and, in a few cases, enacted) partial lockdowns. Throughout July, several companies made announcements of progress toward either treatment or a vaccine. States and local communities struggle with plans to get students back to school.


Through it all, investors stayed with stocks, pushing them to their fourth consecutive month-over-month gain. The big winners in July were the Nasdaq and the S&P 500. The Global Dow advanced 3.5%, followed by the Russell 2000 and the Dow.


Year to date, the Nasdaq and the S&P 500 are ahead of their respective 2019 closing values. The next closest is the Dow, which remains more than 7.0% behind last year's pace.

June's economic data was a mixed bag. Nearly 5 million jobs were added to the labor force, the housing sector picked up steam, and industrial production rose. On the other hand, the federal budget deficit neared $900 billion, the international trade deficit increased, and producer prices sank. As more data for July is released, it will likely offer a mixed bag of good and bad as the economy slowly pushed toward recovery. Entering August, most eyes will focus on Congress and the president as they try to hammer out another financial stimulus package.

Data sources: Economic: Based on data from U.S. Bureau of Labor Statistics (unemployment, inflation); U.S. Department of Commerce (GDP, corporate profits, retail sales, housing); S&P/Case-Shiller 20-City Composite Index (home prices); Institute for Supply Management (manufacturing/services). Performance: Based on data reported in WSJ Market Data Center (indexes); U.S. Treasury (Treasury yields); U.S. Energy Information Administration/Bloomberg.com Market Data (oil spot price, WTI, Cushing, OK); www.goldprice.org (spot gold/silver); Oanda/FX Street (currency exchange rates). News items are based on reports from multiple commonly available international news sources (i.e. wire services) and are independently verified when necessary with secondary sources such as government agencies, corporate press releases, or trade organizations. All information is based on sources deemed reliable, but no warranty or guarantee is made as to its accuracy or completeness. Neither the information nor any opinion expressed herein constitutes a solicitation for the purchase or sale of any securities, and should not be relied on as financial advice. Past performance is no guarantee of future results. All investing involves risk, including the potential loss of principal, and there can be no guarantee that any investing strategy will be successful.

The Dow Jones Industrial Average (DJIA) is a price-weighted index composed of 30 widely traded blue-chip U.S. common stocks. The S&P 500 is a market-cap weighted index composed of the common stocks of 500 leading companies in leading industries of the U.S. economy. The NASDAQ Composite Index is a market-value weighted index of all common stocks listed on the NASDAQ stock exchange. The Russell 2000 is a market-cap weighted index composed of 2,000 U.S. small-cap common stocks. The Global Dow is an equally weighted index of 150 widely traded blue-chip common stocks worldwide. The U.S. Dollar Index is a geometrically weighted index of the value of the U.S. dollar relative to six foreign currencies. Market indices listed are unmanaged and are not available for direct investment.
*Non-deposit investment products and services are offered through CUSO Financial Services, L.P. ("CFS"), a Registered Broker-dealer (Member FINRA/SIPC) and SEC-registered Investment Advisor. Products offered through CFS: are not NCUA/NCUSIF or otherwise federally insured, are not guarantees or obligations of the credit union, and may involve investment risk including possible loss of principal. Investment Representatives are registered through CFS. General Electric Credit Union has contracted with CFS to make non-deposit investment products and services available to credit union members.