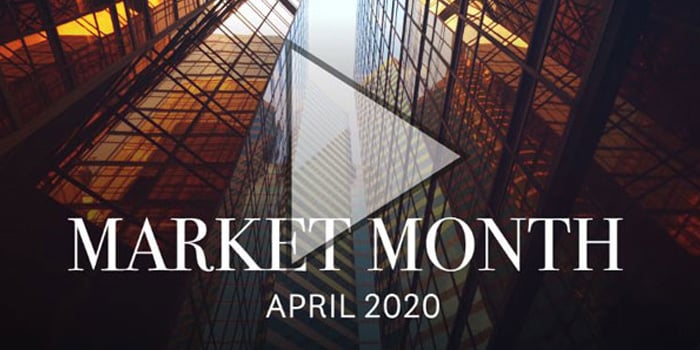 April began on a sour note for stocks as each of the indexes listed here lost value. Economic reports reflected the negative impact of the COVID-19 pandemic. There were more than 700,000 jobs lost in March while total claims for unemployment insurance benefits soared to nearly 18 million. A cut in production didn't prevent crude oil prices from hitting negative numbers as demand waned and storage neared full capacity. Purchasing managers saw manufacturing hit lows not seen in more than ten years.

The federal government continued to try easing the economic strain on individuals and businesses. The Paycheck Protection Program and Health Care Enhancement Act replenished the Paycheck Protection Program, provided funding for additional small business loans, offered financial support to hospitals, and increased the availability for more virus testing. The Federal Reserve added trillions of dollars in funds to its lending programs for states, cities, and midsize businesses. But the economic strain prompted a few states to begin the process of easing lockdown restrictions and reopening a range of businesses, in lieu of stay-at-home restrictions.

Despite several periods of volatility, stocks enjoyed their best month since 1987. A spike during the week leading up to Easter pushed stocks ahead to stay for the month. Of the benchmark indexes listed here, only the Global Dow did not reach double-digit gains for the month. The Nasdaq climbed more than 15.0% and is less than 1.0% from its year-end value. The large caps of both the Dow (11.08%) and the S&P 500 (12.68%) posted solid gains as did the small caps of the Russell 2000, which jumped nearly 14.0%. While stock values rose in April, bond yields fell as prices climbed. The yield on 10-year Treasuries dropped 7 basis points from March and is close to 130 basis points below its 2019 value.

While April was a solid month for stocks, the economy has slowed dramatically. As more data is revealed, the news on the economic front is expected to continue to show the negative impact of COVID-19. Jobs, manufacturing, and government spending are sectors expected to be hit hardest.